The Maine Farmers’ Market Conventions are annual get-togethers of farmers’ market participants and workshop presenters held in late January. The first convention was organized in 2009 by the Downeast Business Alliance, a division of the Washington Hancock Community Agency.

The purpose of the Conventions is to educate those involved in organizing and participating in farmers’ markets on better ways that were available to organize these businesses, including contacts with service providers of all types and offering networking opportunities for the participants.

By 2010, a major theme of the Conventions became need for the establishment of a statewide association of Maine’s farmers’ markets. By 2012, this came to fruition with the decision to re-start the Maine Federation of Farmers’ Markets, an organization that had been active from 1991-1997, but had been defunct since that time. At the 2013 Convention, DBA formally handed over future Convention organizing to the Federation.

Each Convention offers workshops providing education and knowledge-sharing opportunities. Handouts, photos, and participant comments from most of the Conventions are available from the individual Convention pages below.

For a full list of speakers from all conventions with their bios and photos, visit Convention Speakers. 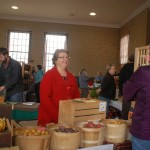 Islesboro Farmers’ Market is open every Wednesday, 10:30am-1:00pm, late June through early September.  The market is held at Islesboro Community Park, 103 Pendleton Point Rd at the corner of Main and Mill Creek Road.  Our vendors bring some of the best produce, prepared and baked goods (both sweet and savory), meats, dairy, soaps, fine wood […]