Who shops at Maine farmers’ markets? 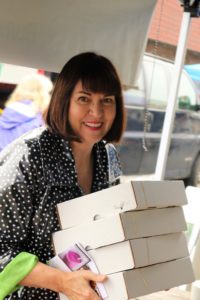 People travel an average distance of six miles to get to the market at which they shopped, indicating that shoppers typically don’t stray far from home to pick up local products. However, Maine’s farmers’ markets are also beloved among travellers passing through the state; people surveyed travelled up to 7500 miles away from home. In terms of age, 25.6% of the respondents were ages 55-64 and 22.4% of customers were ages 65-74, while only 6.6% of customers were ages 18-24 and 12.2% were ages 25-34.

When asked what products people come to farmers’ markets for, the largest percentage of people, or 81.49%, responded produce, while 20.77% said baked goods, 14.14% said meats (excluding fish), 10.18% said dairy products, and 7.36% said eggs. In addition, 26.31% of people responded ‘other’, which included products like honey, flowers, and plants.

However, people are not limited to shopping for one type of item or even at one specific vendor; only 4.4% of respondents said that they purchase from one vendor, while 34.68% of people said that they purchase from three different vendors and 28.77% of people said that they shop at four different vendors. While at the market, people spent a total average of $32.78 and an average of $24.89 at nearby businesses either before or after their shopping excursions at the farmers’ market.

When survey respondents were asked how often they had shopped at farmers’ markets over the course of the past year (2016-2017), the largest percentage of people, 30.2%, said weekly, while the next largest percentage of people, 21.02%, said two to five times. This indicates that people are either regular customers and make it a habit to shop at farmers’ markets each week, or they only come out only a few times a year to see what the markets have to offer.

In one question asking if credit cards influence one’s spending at farmers’ markets, 43.42% said yes, while 50.41% said no. Some people indicated that the ability to use a credit card is convenient and that they may spend more money with a card than with cash.

Whatever your reason may be for shopping at Maine’s farmers’ markets, the promise of fresh, local foods, good conversation, and friendly, smiling faces of neighbors, strangers, and farmers always make the trip worth it.