National Farmers’ Market Week is August 2-8, 2015. After a cool start to the summer, farmers across the state will be bringing amazingly diverse bounty to the markets just in time for this annual occasion. Many markets have also planned events to celebrate the special week.

Farmers’ markets are more than just an outlet for fresh produce and friendly farmers. According to United States Department of Agriculture (USDA) statistics, these grassroots venues have increased in number by over 60% since 2009 to nearly 8,500 today. Viable markets preserve farmland, stimulate local economies, increase access to fresh nutritious food, improve community health, and promote sustainability. For example, growers selling locally create thirteen full time farm operator jobs per $1 million in revenue earned while those that do not sell locally only create three. The Farmers’ Market Coalition recently released a series of fact sheets detailing the many other impacts of markets. Maine is home to nearly 150 farmers’ markets.

The Maine Federation of Farmers’ Markets was founded in 1991 as a grassroots organization, and currently serves farmers’ markets across the state from its office in Pittsfield. More than 1500 producers are members of farmers’ markets from Presque Isle to York, representing the best foods Maine has to offer. The Federation maintains the only statewide database of Maine farmers’ markets, with a searchable map available online.

“Many people don’t realize the variety of foods available at their local farmers’ market,” according to Leigh Hallett, Executive Director of the Maine Federation of Farmers’ Market. “Maine’s farms tend to be small but very diverse, with market farmers bringing fantastic offerings. There is also a varied price range, from exotic delicacies to very affordable dietary staples.”

Beginning this summer, 35 Maine farmers’ markets are participating in the USDA’s Food Insecurity Nutrition Incentive Program, a new program that helps low-income shoppers produce directly from farmers. The program (which is federally funded, but matched dollar-for-dollar by private donations) will enable participating farmers’ markets to offer bonuses for fruit and vegetable purchases by SNAP shoppers. Maine is second in the nation for the amount of SNAP benefits that are redeemed direct from growers, but most SNAP dollars are still spent at major retailers. This program will help make local produce more accessible, and keep more federal funding circulating in the local economy. (See the full list of participating markets on our website.) 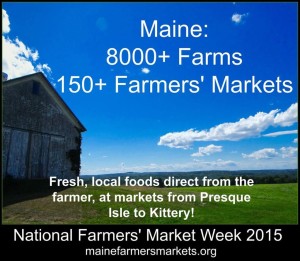