How to cook eggplant to tender, silky perfection

If your grilling your eggplant, click the image to watch a video on how to grill eggplant without charring it.  Photo by: Amy Albert

Eggplant holds an esteemed place in many Mediterranean cuisines—caponata from Italy, ratatouille from Provence, moussaka from Greece, baba ghanouj from all over the Middle East, and myriad hot and cold dishes from Turkey, where eggplant is the king of vegetables.

But many American cooks hesitate when it comes to eggplant. What does salting the eggplant do? How to prevent it from soaking up all that oil? How to know if you’re properly cooking it when you’re grilling, roasting, or frying?  Using these simple techniques for selection, preparation, and cooking, you’ll be able to grill, roast, or fry eggplant to succulent, creamy perfection.

How to choose eggplant at the farmers’ market

At the market, look for eggplant with smooth, shiny skin that’s unwrinkled. The fruit should feel firm and spring back slightly when you touch it. Try to find an eggplant with a stem that looks moist, as if recently cut. It’s best to use eggplant when it’s very fresh, but it will keep for two or three days in the crisper drawer of the refrigerator.

Western or globe eggplant is the most common and versatile variety, and you can find it year-round, though in most parts of the country, the peak season is late summer. Though it needs a little preparation, the reward is a succulent, silky treat. Globe eggplant is the most versatile variety, too—its larger size enables you to get slices and chunks. It varies in size from 3/4 pound to 1-1/4 pounds, with dark purple skin. A fresh globe eggplant has pale pulp with a few noticeable seeds, which darken and become bitter as the eggplant matures. Eggplant with parts of dark, hardened pulp with lots of dark seeds will be a disappointment—these parts must be removed; otherwise, the flavor and the texture of the finished dish will suffer.

The one type of dish for which globe eggplant isn’t so good is stuffed eggplant dishes, such as Turkey’s famed imam bayildi(pronounced AH-mahn by-yahl-deh), where you need smaller, individual eggplant for the look of the finished dish. Japanese eggplant is perfect for this; I can always be sure that the pulp will be tender and that the eggplant won’t need peeling or salting.

Peel for the best texture

Peel the eggplant in stripes (unless you’re using a tender-skinned variety) and then slice or cube it, depending on the recipe.

Because globe eggplant and other large varieties usually have tough skins, peeling it is a good idea, especially if you’re serving it in chunks or slices. But I don’t like to remove the skin entirely. Instead, I partially peel it in a striped fashion.

When you grill-roast the eggplant and then separate the flesh from the peel, keep the skin on during cooking to keep the eggplant intact. 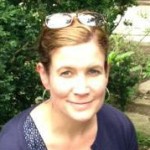 Leigh has been Executive Director of the Federation since 2014. She can be reached by email (director@mffm.org) or by calling the MFFM offices (487-7114).
View all posts by Leigh Hallett