History of the 2017 Food Sovereignty Act

The recent history of the Food Sovereignty Act:

10/23/17 In special session, the Legislature voted to amend LD724 to exempt meat and poultry processing from the food sovereignty law, meaning the state inspected meat processing facilities will be able to continue operating. The amendment to the law also stipulates that the food sovereignty law only applies to transactions conducted at the farm or home where the food was produced. Any food sold at a farmers’ market remains subject to state food safety regulations. The amendment was signed by the governor October 31st.

10/18/17 The new food sovereignty law is set to take effect November 1st. The Legislature needs to amend the law or the USDA will no longer allow the state to operate its own meat processing inspection program.  (The state has to certify that the facilities it inspects meet federal safety guidelines, and the new law, as written, means the state can no longer do that.) Closing the state-licensed facilities would be a disaster for farmers at any time of year, but particularly hard in the fall. The Maine Farm Bureau has issued a legislative alert – read it here: Legislative Update re Food Sovereignty Law.

The public hearing about amending the law is Friday, October 20th at 9:30am at the Cross Office Building in Augusta. The Legislature will vote on the matter on Monday, October 23rd.

The new Food Sovereignty Act, LD 725, is scheduled to take effect on November 1st. Among other provisions, the law stipulates that, in towns may choose to disregard state law pertaining to food safety when it comes to food prepared within the town’s borders and sold within the town’s border. In passing the law, the Legislature gave towns “broad authority… to promulgate ordinances the State would be required to follow,” according to the USDA.

Meat and poultry processing is regulated by the the USDA, meaning it falls under federal law. State governments can’t change federal laws, and must insure that local requirements are at least as strict as the federal rules. Since the Food Sovereignty Act gives authority to set food safety regulations to local communities (most of which presumably do not have staff trained in food safety), that essentially means the USDA can no longer trust that the state of Maine will enforce regulations at least as strict as the federal rules. Therefore, if the law is implemented as written, the USDA will no longer allow state-licensed meat processing facilities in Maine. (Read a recent BDN article here.) If this were to happen, only USDA meat processing facilities would be legal, and it would not be legal to sell meat processed at current state facilities.

The announcement from the USDA was not unexpected, and came in a letter delivered just a few weeks after Gov. LePage signed the law. (See the USDA letter here.). This week the Governor called for an emergency session of the Legislature to convene this fall in an attempt to amend LD 725 to be in compliance with federal law.

Having meat processed in Maine is already a challenge because there are few state-licensed facilities, meaning farmers may face not only long drives with their livestock, but long waits for their products. If the state facilities are forced to close because Maine law violates federal food safety requirements, that would be crippling for many farms. People who care about these issues may wish to contact their local Representative, to urge that person to take action to bring Maine law back into compliance. (Find out more about contacting your local rep on this page.)

On June 16th, 2017, Governor LePage signed a new food sovereignty bill into law. (See the text of the law, LD 725, An Act to Recognize Local Control Regarding Food Systems, here.) The law will take effect 90 days after the 128th Legislature adjourns (likely in July), and will impact towns that have already declared food sovereignty. In those towns, local ordinances will supercede state food safety regulations.

Kennebunk Farmers’ Market runs Saturdays 8:00am to 1:00pm at the Garden Street Lot • Rain or Shine! • May through November. We are Proud to Be a Producer-Only Market When you shop with us, you’re buying directly from the people who grew or raised or created that product for you. It’s a great way to […] 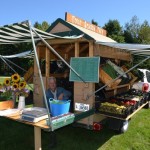